A REESTRUTURAÇÃO SEGUNDO ROGOFF
Kenneth Rogoff, um dos mais respeitados economistas mundiais e autor de um dos melhores livros sobre crises financeiras ("This Time is Different", escrito em co-autoria com Carmen Reinhart), continua a defender que a crise da dívida soberana europeia só será resolvida com uma reestruturação da dívida de alguns países. Aqui está um excerto do seu artigo de opinião mais recente:
"Europe is in constitutional crisis. No one seems to have the power to impose a sensible resolution of its peripheral countries’ debt crisis. Instead of restructuring the manifestly unsustainable debt burdens of Portugal, Ireland, and Greece (the PIGs), politicians and policymakers are pushing for ever-larger bailout packages with ever-less realistic austerity conditions. Unfortunately, they are not just “kicking the can down the road,” but pushing a snowball down a mountain.
True, for the moment, the problem is still economically manageable. Eurozone growth is respectable, and the PIGs account for only 6% of the eurozone’s GDP. But by stubbornly arguing that that these countries are facing a liquidity crisis, rather than a solvency problem, euro officials are putting entire system at risk. Major eurozone economies like Spain and Italy have huge debt problems of their own, especially given anemic growth and a manifest lack of competitiveness. The last thing they need is for people to be led to believe that an implicit transfer union is already in place, and that reform and economic restructuring can wait.
European Union officials argue that it would be catastrophic to restructure any member’s debts proactively. It is certainly the case that contagion will rage after any Greek restructuring. It will stop spreading only when Germany constructs a firm and credible firewall, presumably around Spanish and Italian central-government debt. This is exactly the kind of hardheaded solution that one would see in a truly integrated currency area."
O resto do artigo pode ser lido aqui.
Posted by Rui Fonseca at 11:14 AM No comments:

Fort Knox - What to Do with Old Yeller

Should the U.S. sell off its gold reserves to pay down debt? That's the latest idea being tossed around by gold bug Ron Paul. Not only would selling Old Yeller help the U.S. pay its bills, says libertarian Paul, but it would put more gold in the hands of the American people and pull back the reins on the Federal Reserve, which is printing money like mad and debasing the value of our currency. So insistent is Paul about this strategy that he challenged the government to a gold audit to make sure its stash of bullion at Fort Knox is really all there. (According to the Treasury's inspector general, it is.) So is selling it a good strategy, or is Paul just a crazy kook?
When it comes to the concept of gold, it can be hard to tell. With the price of gold up 24% in the past year, the gold bulls are everywhere. And our country has a long history of obsessing over gold, which Thomas Frank describes quite well in the latest issue of Harper's:
I do not mean to scoff at gold bugs — or not much, anyway. Money cranks are part of a long tradition in American life, and just as there was an attractive democratic subtext to the free-silver agitation of the 1890s, so there is an attractive moral idea behind the hard-money mania of the present day. It's the old story of hubris, of man getting above himself and crashing inevitably back to earth. Even if the central bankers' intentions are good, reasons the metalhead, they are still bound to screw things up…
These mandarins fiddle with mortgage incentives, they try to adjust the knobs and get the interest rate exactly right, they use the tax code to encourage this and discourage that, and when all else fails they rescue the big banks with drafts on the public treasury of a size that would be considered insane in any situation other than a world war. Sooner or later, the gold bug feels, this technocrat-made system will come crashing down.
For folks who generally believe in having a central government, it's easy to write off hard-money cranks like Paul and Utah Governor Gary Herbert, who last month signed a state law that renders gold and silver coins minted by the U.S. government legal tender. But what about all the wise and successful investors who have also been stashing gold in this economy? For instance, John Paulson, George Soros, Goldman Sachs, and Citigroup, to name a few. Are they just hard-money kooks too?
Not likely. The fact is, there are valid reasons to hold some gold in this economy. The Wall Street Journal's Dave Kansas describes a few:
Greece (and Portugal and Ireland and..). Athens runs out of cash in about a month. Out. Of. Cash. Eurocrats are scrambling to give Greece another band-aid, via more loans and a “voluntary” rescheduling of Greece's debt. Many are warning that a Greek default could lead to nasty repercussions for the common currency. Given that the euro-zone represents a giant chunk of the global economy (Germany, France, Italy), the frailty of the common currency makes sturdy gold attractive.
Inflation. We don't see much in the U.S., but it is creeping higher around the world (China, India, the euro-zone, the UK are all grappling with higher inflation). Plenty of level-headed people think the deeply indebted developed world will need inflation to make those debts less burdensome. With monetary policy extremely loose around the world, it could happen. In such a scenario, gold is a solid store of value.
Deflation. Okay, sort of having it both ways on the inflation/deflation front, but some gold backers still fear deflationary problems, similar to what Japan has dealt with for the past two decades following its asset-bubble collapse. Deflation is considered worse than inflation.
Middle East unrest. War (Libya), Civil Unrest (Syria, Yemen, Bahrain) and still unpredictable revolutions (Egypt, Tunisia) could spill into something nastier, putting the globe's oil markets on edge. Again, gold can make sense if chunks of the world look very unpredictable.
That raises the question: Even if you believe in selling off gold to pay down government debt, is it really the right time for the U.S. to sell? Ron Utt, an analyst at the Heritage Foundation, thinks the U.S. should strike while gold prices are high. He recently said: "Given the high price it is now, and the tremendous debt problem we now have, by all means, sell at the peak." But if, like Paul, you believe our paper currency is doomed, then the price of gold is surely still headed up. And in this market, selling off the government's gold wouldn't get you very far. The Treasury's roughly 262 million ounces of bullion is worth about $390 billion. That's only a fraction of our $1.5 trillion deficit and an even smaller slice of our $14 trillion in federal debt.
There are plenty of other reasons for the U.S. not to sell its gold (see list above). As with any investor, a dose of gold in the U.S.'s portfolio serves as a worst-case inflation hedge. Plus, the price of gold is historically very volatile -- up 10% one month, down 10% the next -- which is why governments don't go selling it off on a whim. And if the world's most successful investors think holding onto their gold is a good idea in this economy, the U.S. government should probably do the same.
Posted by Rui Fonseca at 12:00 PM No comments:

de Louise_Bourgeois
aqui e aqui
Posted by Rui Fonseca at 8:00 AM No comments:

Posted by Rui Fonseca at 6:06 AM No comments:

King at odds with ECB on eurozone crisis
By Daniel Pimlott
Mervyn King, governor of the Bank of England, warned on Friday that stopgap measures to extend new loans to countries such as Greece, Portugal and Ireland would not solve the eurozone debt crisis.
Presenting the Bank’s first analysis of financial stability in the UK banking system since taking over those responsibilities from the Financial Services Authority, he said the eurozone debt crisis was a crisis of solvency that would not be resolved by extending new loans.
“Right through this crisis from the very beginning ... an awful lot of people wanted to believe that it was a crisis of liquidity,” Mr King said. “It wasn’t, it isn’t. And until we accept that, we will never find an answer to it. It was a crisis based on solvency ... initially financial institutions and now sovereigns.”
The views of Mr King put him at odds with the ECB and eurozone governments which have extended hundreds of billions of euros in bail-outs to Greece, Ireland and Portugal in an attempt to solve the crisis.
But these countries have been faced with contracting economies as austerity measures introduced as conditions of the bail-outs have curtailed economic development and made it harder for the likes of Greece and Ireland to cope with their debts.
The European Central Bank, the IMF and governments in the eurozone are currently in talks about extending a €12bn aid payment to Greece to avoid inflicting a default on holders of Greek bonds that could reinflame the financial crisis.
“Providing liquidity can only be used to buy time,” Mr King said. “Simply the belief, ‘oh we can just lend a bit more’, will never be an answer to a problem which is essentially one about solvency.”
Mr King said that the eurozone debt crisis posed the biggest threat to the UK banking system but he noted that the risk was indirect because banks’ exposure to Greece was “remarkably small”.
The UK banking sector is less exposed to Greece than some of its continental peers, including France and Germany. Royal Bank of Scotland, still 83 per cent owned by the UK taxpayer, holds €1.1bn worth of Greek sovereign debt, while HSBC holds €800m, according to Barclays Capital. That compares with a direct sovereign exposure of €5bn at France’s BNP Paribas, and nearly €3bn at Germany’s Commerzbank.
The European Banking Authority is due to release country-by-country sovereign debt exposure for 90 EU big banks in mid-July as part of its stress tests.
The Bank governor said greater disclosure was needed by banks of their exposure to sovereign and banking debt.
He recommended that smaller banks, excluded from EU stress tests, should gather more data on sovereign and banking debt exposure.
In its analysis, the Financial Policy Committee, the new body charged with overseeing the financial system, said that authorities needed to maintain a closer eye on complex and opaque financial instruments, such as exchange traded funds, that banks are using to raise funds.
Speaking at a European Council summit in Brussels to discuss a solution to the Greek debt crisis, David Cameron, UK prime minister, said: “Every bank needs to make absolutely clear what its exposure is [to European sovereign debt].
“As I have said, and secured in these Council conclusions, we need to make sure all our banks are being strengthened in terms of their capital reserves and what they can withstand.”
The report also said that banks should give more information on the extent of forbearance currently being given to the household and corporate sector.
The Bank has been asked to take on additional financial stability roles by the coalition government, including absorbing the FSA into its structure. The reforms vastly extend the Bank’s reach and responsibility in the UK economy and financial sector.
Posted by Rui Fonseca at 7:19 AM No comments: 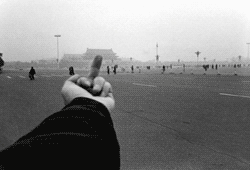 The finger
Posted by Rui Fonseca at 9:24 AM No comments:

Posted by Rui Fonseca at 4:39 AM No comments: