Posted by Rui Fonseca at 4:27 AM No comments:

Humanity’s greatest political achievement has been the decline of war. That is now in jeopardy 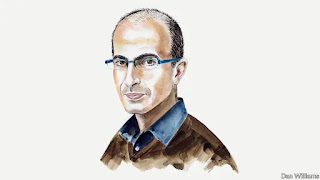 AT THE HEART of the Ukraine crisis lies a fundamental question about the nature of history and the nature of humanity: is change possible? Can humans change the way they behave, or does history repeat itself endlessly, with humans forever condemned to re-enact past tragedies without changing anything except the décor?

One school of thought firmly denies the possibility of change. It argues that the world is a jungle, that the strong prey upon the weak and that the only thing preventing one country from wolfing down another is military force. This is how it always was, and this is how it always will be. Those who don’t believe in the law of the jungle are not just deluding themselves, but are putting their very existence at risk. They will not survive long.

Another school of thought argues that the so-called law of the jungle isn’t a natural law at all. Humans made it, and humans can change it. Contrary to popular misconceptions, the first clear evidence for organised warfare appears in the archaeological record only 13,000 years ago. Even after that date there have been many periods devoid of archaeological evidence for war. Unlike gravity, war isn’t a fundamental force of nature. Its intensity and existence depend on underlying technological, economic and cultural factors. As these factors change, so does war.

Evidence of such change is all around us. Over the past few generations, nuclear weapons have turned war between superpowers into a mad act of collective suicide, forcing the most powerful nations on Earth to find less violent ways to resolve conflict. Whereas great-power wars, such as the second Punic war or the second world war, have been a salient feature for much of history, in the past seven decades there has been no direct war between superpowers.

During the same period, the global economy has been transformed from one based on materials to one based on knowledge. Where once the main sources of wealth were material assets such as gold mines, wheat fields and oil wells, today the main source of wealth is knowledge. And whereas you can seize oil fields by force, you cannot acquire knowledge that way. The profitability of conquest has declined as a result.

Finally, a tectonic shift has taken place in global culture. Many elites in history—Hun chieftains, Viking jarls and Roman patricians, for example—viewed war positively. Rulers from Sargon the Great to Benito Mussolini sought to immortalise themselves by conquest (and artists such as Homer and Shakespeare happily obliged such fancies). Other elites, such as the Christian church, viewed war as evil but inevitable.

In the past few generations, however, for the first time in history the world became dominated by elites who see war as both evil and avoidable. Even the likes of George W. Bush and Donald Trump, not to mention the Merkels and Arderns of the world, are very different types of politicians than Attila the Hun or Alaric the Goth. They usually come to power with dreams of domestic reforms rather than foreign conquests. While in the realm of art and thought, most of the leading lights —from Pablo Picasso to Stanley Kubrick—are better known for depicting the senseless horrors of combat than for glorifying its architects.

As a result of all these changes, most governments stopped seeing wars of aggression as an acceptable tool to advance their interests, and most nations stopped fantasising about conquering and annexing their neighbours. It is simply not true that military force alone prevents Brazil from conquering Uruguay or prevents Spain from invading Morocco.

The parameters of peace

The decline of war is evident in numerous statistics. Since 1945, it has become relatively rare for international borders to be redrawn by foreign invasion, and not a single internationally recognised country has been completely wiped off the map by external conquest. There has been no shortage of other types of conflicts, such as civil wars and insurgencies. But even when taking all types of conflict into account, in the first two decades of the 21st century human violence has killed fewer people than suicide, car accidents or obesity-related diseases. Gunpowder has become less lethal than sugar.

Scholars argue back and forth about the exact statistics, but it is important to look beyond the maths. The decline of war has been a psychological as well as statistical phenomenon. Its most important feature has been a major change in the very meaning of the term “peace”. For most of history peace meant only “the temporary absence of war”. When people in 1913 said that there was peace between France and Germany, they meant that the French and German armies were not clashing directly, but everybody knew that a war between them might nevertheless erupt at any moment.

In recent decades “peace” has come to mean “the implausibility of war”. For many countries, being invaded and conquered by the neighbours has become almost inconceivable. I live in the Middle East, so I know perfectly well that there are exceptions to these trends. But recognising the trends is at least as important as being able to point out the exceptions.

The “new peace” hasn’t been a statistical fluke or hippie fantasy. It has been reflected most clearly in coldly-calculated budgets. In recent decades governments around the world have felt safe enough to spend an average of only about 6.5% of their budgets on their armed forces, while spending far more on education, health care and welfare.

We tend to take it for granted, but it is an astonishing novelty in human history. For thousands of years, military expenditure was by far the biggest item on the budget of every prince, khan, sultan and emperor. They hardly spent a penny on education or medical help for the masses.

The decline of war didn’t result from a divine miracle or from a change in the laws of nature. It resulted from humans making better choices. It is arguably the greatest political and moral achievement of modern civilisation. Unfortunately, the fact that it stems from human choice also means that it is reversible.

Technology, economics and culture continue to change. The rise of cyber weapons, AI-driven economies and newly militaristic cultures could result in a new era of war, worse than anything we have seen before. To enjoy peace, we need almost everyone to make good choices. By contrast, a poor choice by just one side can lead to war.

This is why the Russian threat to invade Ukraine should concern every person on Earth. If it again becomes normative for powerful countries to wolf down their weaker neighbours, it would affect the way people all over the world feel and behave. The first and most obvious result of a return to the law of the jungle would be a sharp increase in military spending at the expense of everything else. The money that should go to teachers, nurses and social workers would instead go to tanks, missiles and cyber weapons.

A return to the jungle would also undermine global co-operation on problems such as preventing catastrophic climate change or regulating disruptive technologies such as artificial intelligence and genetic engineering. It isn’t easy to work alongside countries that are preparing to eliminate you. And as both climate change and an AI arms race accelerate, the threat of armed conflict will only increase further, closing a vicious circle that may well doom our species.

If you believe that historic change is impossible, and that humanity never left the jungle and never will, the only choice left is whether to play the part of predator or prey. Given such a choice, most leaders would prefer to go down in history as alpha predators, and add their names to the grim list of conquerors that unfortunate pupils are condemned to memorize for their history exams.

But maybe change is possible? Maybe the law of the jungle is a choice rather than an inevitability? If so, any leader who chooses to conquer a neighbour will get a special place in humanity’s memory, far worse than your run-of-the-mill Tamerlane. He will go down in history as the man who ruined our greatest achievement. Just when we thought we were out of the jungle, he pulled us back in.

I don’t know what will happen in Ukraine. But as a historian I do believe in the possibility of change. I don’t think this is naivety—it’s realism. The only constant of human history is change. And that’s something that perhaps we can learn from the Ukrainians. For many generations, Ukrainians knew little but tyranny and violence. They endured two centuries of tsarist autocracy (which finally collapsed amidst the cataclysm of the first world war). A brief attempt at independence was quickly crushed by the Red Army that re-established Russian rule. Ukrainians then lived through the terrible man-made famine of the Holodomor, Stalinist terror, Nazi occupation and decades of soul-crushing Communist dictatorship. When the Soviet Union collapsed, history seemed to guarantee that Ukrainians would again go down the path of brutal tyranny – what else did they know?

But they chose differently. Despite history, despite grinding poverty and despite seemingly insurmountable obstacles, Ukrainians established a democracy. In Ukraine, unlike in Russia and Belarus, opposition candidates repeatedly replaced incumbents. When faced with the threat of autocracy in 2004 and 2013, Ukrainians twice rose in revolt to defend their freedom. Their democracy is a new thing. So is the “new peace”. Both are fragile, and may not last long. But both are possible, and may strike deep roots. Every old thing was once new. It all comes down to human choices.■

Yuval Noah Harari is a historian, philosopher and author of “Sapiens” (2014), “Homo Deus” (2016) and the series “Sapiens: A Graphic History” (2020-21). He is a lecturer in the Hebrew University of Jerusalem’s history department and co-founder of Sapienship, a social-impact company.

Posted by Rui Fonseca at 6:35 AM No comments: 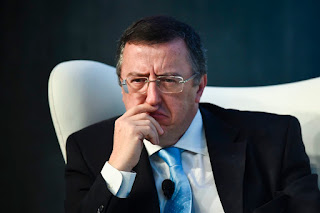 Posted by Rui Fonseca at 3:06 AM No comments: 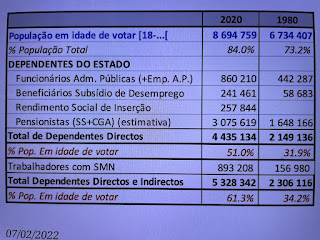 Posted by Rui Fonseca at 4:44 PM No comments: 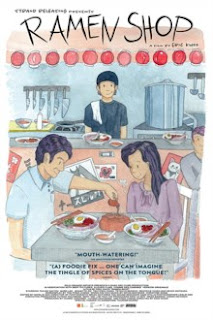 Posted by Rui Fonseca at 7:26 AM No comments:

Posted by Rui Fonseca at 3:31 AM No comments: 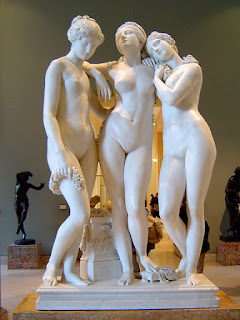 de Pradier, no Museu do Louvre 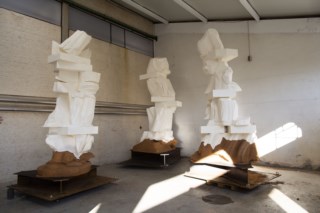 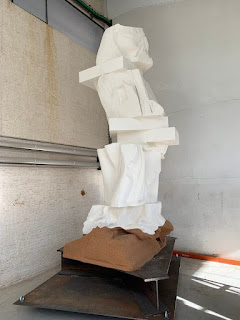 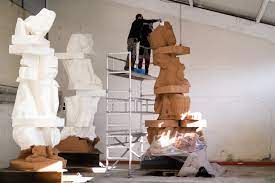 Posted by Rui Fonseca at 3:24 AM No comments: 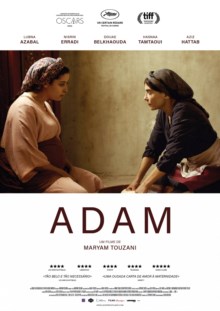 Posted by Rui Fonseca at 3:07 AM No comments:

Posted by Rui Fonseca at 5:00 AM No comments: