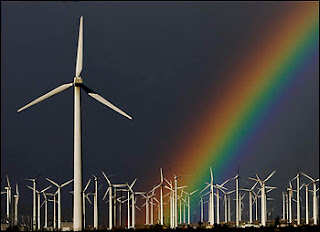 A wind farm in Palm Springs, Calif. In California, utilities must get 20 percent of their power from renewable sources by 2010

The Imperial Valley of California is ideal country for solar and wind power. It rains less than three inches a year. Temperatures hit 110 degrees in the summer. The wind blows pretty steadily, too. And it's just east of San Diego.
Now, because of a California law requiring utilities to get 20 percent of their electricity from renewable sources by 2010, this untapped renewable-energy basin has caught the attention of Sempra Energy. The utility, based in San Diego, gets only 6 percent of its electricity from renewable resources, so it has proposed building a transmission line to bring solar power from the desert to the city.
California is one of 25 states that have adopted laws that require electric utilities to use more renewable resources, and that has sent utilities scrambling to line up wind and solar projects across the country. Electric utilities that have long relied on coal, nuclear energy and natural gas to power their generating plants are buying into biomass projects from Minnesota to Virginia, solar plants in the deserts of California and Arizona, and wind farms from Maine to West Texas.
Yesterday, Dominion, a utility based in Richmond, said it would work with BP's alternative-energy unit to develop, own and operate wind farms in Virginia, part of an effort to meet a goal of getting 12 percent of its energy from renewable sources by 2022.
"There is a lot of opportunity for wind projects in Virginia, and we would hope we'd be able to bring a lot to the table working with BP," said Mark McGettrick, president and chief executive of Dominion Generation. McGettrick said the company was looking at several sites in western Virginia and onshore near the coastline.
Dominion gets only 2.9 percent of its energy from renewable resources and would need to add 1,325 megawatts of renewable capacity to meet the state's target. That's equal to almost two new coal-fired plants.
Although Congress failed to set a nationwide standard for utilities' use of renewable resources as part of its energy bill last year, bills passed by state legislatures are steering utilities away from power plants that generate greenhouse gases. Wind power accounted for 30 percent of all new U.S. generating capacity last year, according to the American Wind Energy Association.
Although Virginia's target is voluntary (the state's regulators will give utilities an extra two percentage points on their regulated profit margins to encourage compliance), most state laws carry stiff financial penalties for firms that fail to comply.
"The whole question has changed," said Jeffery Wolfe, chief executive of GroSolar, a Vermont solar installation firm. The new standards "are forcing the utilities to do things they wouldn't do."
According to a study by the Lawrence Berkeley National Laboratory, state renewable-electricity standards will lead to the addition of 60 gigawatts of renewable capacity by 2025, equal to 4.7 percent of projected U.S. electricity generation, or about 40 or 50 new nuclear power plants.
Neil Schmale, president of Sempra Energy, said California's standard is "very much affecting the way we do business because we're trying to meet that standard." Sempra has contracts in place that are supposed to boost renewables to 13 percent of its generation portfolio by 2010. And it's searching for more to meet the 20 percent threshold. "There's definitely some more work to do," Schmale said.
Other utilities are not as close to their mandated targets, but the deadlines tend to be further in the future.
In February, Arizona Public Service announced that it would build a 280-megawatt solar power plant, using mirrors to concentrate solar energy, heat fluid and generate steam for turbines. It is also building a small, 24 megawatt biomass plant. Arizona Public Service must get 15 percent of its power from renewables by 2025; now it gets less than 2 percent.
Some executives lament the lack of a national policy because the patchwork of state regulations pushes investment away from some of the most economical wind and solar projects. McGettrick said there are better wind prospects outside Virginia, but Dominion wants to change its footprint in its home state -- and take advantage of rate concessions being offered.
In California, Schmale said, a federal standard might allow utilities to link up with projects outside the state, including wind power in Texas or Wyoming, where wind blows stronger and steadier.
But in the absence of federal policy, governors, regardless of party affiliation, have made the renewable-electricity standards touchstones of their administrations.
Minnesota Gov. Tim Pawlenty (R) has embraced an ambitious standard -- 25 percent renewable use by 2025 -- that will require more than 5,000 megawatts of renewable projects, a total surpassed only by the needs of California and Illinois.
"The biggest barrier, we think, will be the transmission necessary," said Mike Bull, deputy director of Minnesota's office of energy security. To bring power from some of the state's windiest areas to its most populous will require 700 miles of new transmission lines, the state says. "There's a lot of attention, a lot of concern and a lot of effort going on to make sure we have the transmission capacity so we don't miss" the milestones, Bull said. "No one wants to be responsible for not meeting these milestones."