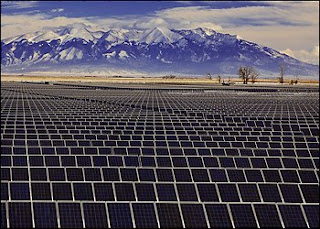 By Anita Huslin http://www.washingtonpost.com/wp-dyn/content/article/2008/04/13/AR2008041301752.html
For Tony Clifford, president of Standard Solar, the threats of climate change and high energy prices have been great for business. His Gaithersburg firm, which installs solar panels for homes, has tripled its revenue in the past year and raised new funds for expansion.
Last week, he got another piece of good news. The Senate agreed to extend solar and wind energy tax breaks as part of a housing bill that is likely to win approval in the House. An elimination of the tax incentives would have been a blow to Clifford's business, forcing him to cut his staff of 20 and tell subcontractors he no longer needed them.
"We just raised $3.5 million in new capital with the expectation that the incentives were going to get extended," Clifford said. "If the [federal tax breaks] do not happen, that's going to be a significant disincentive for a lot of venture capital."
Although the solar business is booming across the United States, federal tax incentives remain key to fueling the industry's continued growth, utilities and solar firms say. Solar energy is still more expensive than more conventional sources, such as coal or natural gas, and is likely to remain so for a few years.
But solar costs are coming down while coal and gas plant construction costs are going up, and the solar industry says the eight-year extension of tax breaks in the Senate legislation would help create a cleaner, more reliable source of energy.
For 31 years, the federal government has subsidized new wind and solar projects. A tax break that provides up to 30 cents on every dollar it costs to build solar facilities and one for operating wind turbines are set to expire this year. The Senate last week voted to renew them. Now, proponents are pressing the House, which passed a stand-alone tax package with similar extensions, to do the same.
Sens. Maria Cantwell (D-Wash.) and John Ensign (R-Nev.) sponsored the renewable energy tax incentives as an amendment to a housing bill last week. The measure provides up to $500 for consumers to install energy-efficient products in their homes and extends a production tax credit for electricity produced from wind, solar and other renewable sources. Businesses that manufacture and install solar or photovoltaic fuel cells would get a 30 percent investment tax credit.
"We are not only providing certainty to these industries, infusing money into our economy, but creating high-paying, long-term jobs to help Americans get through these tough economic times," Cantwell said.
This makes bankers, solar panel and wind turbine manufacturers, and contractors happy. Without the subsidies, they say, companies would start putting projects on hold, freezing contractors out of the new work and companies and governments out of ways to buy more clean technology.
Indeed, in February, Arizona Public Service Co. announced its intention to build a 280 megawatt solar installation using parabolic mirrors to concentrate heat and steam turbines to generate electricity. But the plant needs regulatory approval and isn't expected to come online until 2011. Don Robinson, the utility's senior vice president of planning and administration, said the plant will be built only if the federal tax incentives are extended.
The alternative-energy industry has learned not to take the tax credits for granted. The wind industry, for instance, has had its production tax credits lapse three times -- in 1999, 2001 and 2003. According to the American Wind Energy Association, new installed wind capacity declined 93, 73 and 77 percent, respectively.
Matt Cheney is chief executive of MMA Renewable Ventures, a subsidiary of Baltimore-based Municipal Mortgage & Equity, a real estate investment company that finances and invests in facilities that generate renewable energy. He said the wind-power industry can handle such funding uncertainty a little better than the solar industry can because wind facilities receive a production tax credit that is not an upfront incentive but is applied over the time the facility operates.
Posted by Rui Fonseca at 1:40 PM