What makes us moral 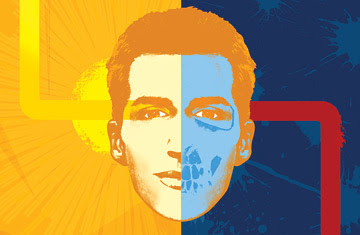 What Makes Us Moral
By JEFFREY KLUGER

If the entire human species were a single individual, that person would long ago have been declared mad. The insanity would not lie in the anger and darkness of the human mind—though it can be a black and raging place indeed. And it certainly wouldn't lie in the transcendent goodness of that mind—one so sublime, we fold it into a larger "soul." The madness would lie instead in the fact that both of those qualities, the savage and the splendid, can exist in one creature, one person, often in one instant.
We're a species that is capable of almost dumbfounding kindness. We nurse one another, romance one another, weep for one another. Ever since science taught us how, we willingly tear the very organs from our bodies and give them to one another. And at the same time, we slaughter one another. The past 15 years of human history are the temporal equivalent of those subatomic particles that are created in accelerators and vanish in a trillionth of a second, but in that fleeting instant, we've visited untold horrors on ourselves—in Mogadishu, Rwanda, Chechnya, Darfur, Beslan, Baghdad, Pakistan, London, Madrid, Lebanon, Israel, New York City, Abu Ghraib, Oklahoma City, an Amish schoolhouse in Pennsylvania—all of the crimes committed by the highest, wisest, most principled species the planet has produced. That we're also the lowest, cruelest, most blood-drenched species is our shame—and our paradox.
The deeper that science drills into the substrata of behavior, the harder it becomes to preserve the vanity that we are unique among Earth's creatures. We're the only species with language, we told ourselves—until gorillas and chimps mastered sign language. We're the only one that uses tools then—but that's if you don't count otters smashing mollusks with rocks or apes stripping leaves from twigs and using them to fish for termites.
What does, or ought to, separate us then is our highly developed sense of morality, a primal understanding of good and bad, of right and wrong, of what it means to suffer not only our own pain—something anything with a rudimentary nervous system can do—but also the pain of others. That quality is the distilled essence of what it means to be human. Why it's an essence that so often spoils, no one can say.
Morality may be a hard concept to grasp, but we acquire it fast. A preschooler will learn that it's not all right to eat in the classroom, because the teacher says it's not. If the rule is lifted and eating is approved, the child will happily comply. But if the same teacher says it's also O.K. to push another student off a chair, the child hesitates. "He'll respond, 'No, the teacher shouldn't say that,'" says psychologist Michael Schulman, co-author of Bringing Up a Moral Child. In both cases, somebody taught the child a rule, but the rule against pushing has a stickiness about it, one that resists coming unstuck even if someone in authority countenances it. That's the difference between a matter of morality and one of mere social convention, and Schulman and others believe kids feel it innately.
Of course, the fact is, that child will sometimes hit and won't feel particularly bad about it either—unless he's caught. The same is true for people who steal or despots who slaughter. "Moral judgment is pretty consistent from person to person," says Marc Hauser, professor of psychology at Harvard University and author of Moral Minds. "Moral behavior, however, is scattered all over the chart." The rules we know, even the ones we intuitively feel, are by no means the rules we always follow.
Where do those intuitions come from? And why are we so inconsistent about following where they lead us? Scientists can't yet answer those questions, but that hasn't stopped them from looking. Brain scans are providing clues. Animal studies are providing more. Investigations of tribal behavior are providing still more. None of this research may make us behave better, not right away at least. But all of it can help us understand ourselves—a small step up from savagery perhaps, but an important one.
more : in
Time
Posted by Rui Fonseca at 12:16 PM