THE ROAD TO RECESSION 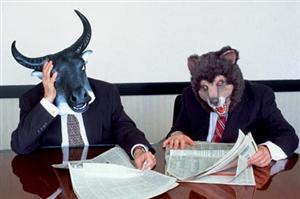 Newsweek: "The Road to Recession",
"The U.S. Economy Faces the Guillotine" and
"Goodbye to the Bulls?"

The cover page on Newsweek magazine this week is titled "The Road to Recession". The fact that this cover story title is written without even a question mark is a signal of how far the consensus has moved towards the recognition of an unavoidable recession that has actually already started.
And if the cover title was not clear enough the title of the cover story in the magazine is "The U.S. Economy Faces the Guillotine". In this cover story the author not only discusses how a US recession is now unavoidable; he also dismisses the hypothesis that the rest of the world can "decouple" from this US hard landing. The fact that yours truly is cited throughout the magazine is no surprise.
Indeed, as I expressed and fleshed out all week at the Davos' WEF:
"The debate today is not any longer on whether we will experience a soft landing or a hard landing in the US; it is rather on how hard the hard landing will be. In other terms on whether the current recession will be relatively mild - say lasting two quarters until the middle of 2008 - or rather be much longer, deeper and uglier and lasting at least four quarters. My view is that the recession will be protracted and painful as a shopped-out, saving-less and debt-burdened consumer is on the ropes and now faltering; while the financial system is on the verge of a systemic crisis that will cause a severe credit crunch...
Indeed the delinquencies and losses in the financial system are spreading from subprime to near prime and prime mortgages; to credit cards and auto loans; to commercial real estate loans; to leveraged loans that financed reckless LBOs; to the losses of the monolines that are effectively bankrupt and at risk of spreading furher massive losses to money market funds and other financial institutions once they get properly downgraded; and soon enough to corporate defaults and junk bonds that will in turn trigger massive losses on credit default swaps; eventual losses in the financial system may add up to more than $1 trillion...
As for decoupling there is no way that the rest of the world can decouple from a US recession. When the US sneezes the rest of the world catches the cold; and unfortunately this time the US will not experience just a case of a mild common cold; it will rather suffer of a painful and protracted episode of pneumonia; thus the real and financial contagion to the rest of the world will be serious...
The Fed will ease aggressively but whatever it does now is too little to late; this easing will not prevent a recession as monetary policy can deal with illiquidity problems but it cannot resolve the deep credit and insolvency issues that plague the US economy; also when there is a glut of capital goods - in 2001 tech capital goods, today a glut of housing, consumer durables and autos the demand for these goods becomes relatively interest rate inelastic; it takes years to clean up this glut and monetary easing does not work as it is like pushing on a string...
U.S. and global equity markets will enter a serious bearish market as a US recession and sharpl global economic slowdown take a toll on investors' risk aversion and firms' earnings and profitability...all risky assets will be under serious pressure in 2008".
Newsweek also asked 15 leading economists to comment on the likelihood of a recession and the recent market turmoil under the title "Goodbye to the Bulls? Fifteen key economists, policymakers and strategists weigh in on a week of volatility and economic turmoil"
Here is my contribution to this debate that opens this survey by Newsweek:

We know booms and busts are aspects of capitalism, and have been so historically. Many of them have been driven by a technological innovation--whether it was the railroad or the Internet--and they may create bubbles, fraud and eventual losses. But they are also driven by real innovation. This latest crisis we see today differs from such historical examples in two important elements. First, with housing there was no technological revolution of any sort. We still build homes basically the same way we did 50 years ago. The innovation in this instance was financial. We went from a system where banks held mortgages on their books to one in which banks originate mortgages, and then securitize and distribute them. The idea was to reduce systemic risk by getting the risk of holding mortgages out of the banks and into the capital markets, and out of the United States and into the global economy. Of course, as we see now with subprime, that has brought a massive contagion in financial markets that is now affecting the real economy.
Comparing with some recent financial crises, I think it's worse than 1987, when we just had a stock-market crash. It's worse than the savings and loan crisis of the late 1980s, because the contagion then was generally limited to the savings and loan thrifts and commercial real-estate sectors. It is much worse than the Long Term Capital Management crisis of 1998. That was a liquidity problem. Today we have insolvency problems. It is much worse than the tech bust of 2000 and 2001, when most of the problems were confined to the tech sector and we had a mild recession. You have to go back to the Great Depression for something comparable. We are, of course, far short of a Great Depression now, but in terms of systemic risk and the risks of a financial meltdown, you almost have to go back that far to find a good analogy.
Roubini is a professor of economics and international business at New York University's Stern School of Business.
Posted by Rui Fonseca at 8:55 AM