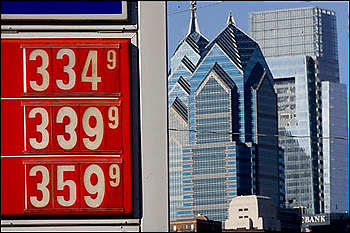 O que nos vale é o euro valer 1,47 dólares.
Imaginem que um dólar valia 1,47 euros.
O petróleo, neste caso, não estaria a 100 dólares/barril?
Por que não?
.
NEW YORK -- Crude oil prices soared to $100 a barrel Wednesday for the first time, reaching that milestone amid an unshakeable view that global demand for oil and petroleum products will outstrip supplies.
Surging economies in China and India fed by oil and gasoline have sent prices soaring over the past year, while tensions in oil producing nations like Nigeria and Iran have increasingly made investors nervous and invited speculators to drive prices even higher.
Violence in Nigeria helped give crude the final push over $100. Bands of armed men invaded Port Harcourt, the center of Nigeria's oil industry Tuesday, attacking two police stations and raiding the lobby of a major hotel. Word that several Mexican oil export ports were closed due to rough weather added to the gains, as did a report that OPEC may not be able to meet its share of global oil demand by 2024.
Light, sweet crude for February delivery rose $4.02 to $100 a barrel on the New York Mercantile Exchange, according to Brenda Guzman, a Nymex spokeswoman, before slipping back to settle at a record close of $99.62, up $3.64.
Oil prices are within the range of inflation-adjusted highs set in early 1980. Depending on how the adjustment is calculated, $38 a barrel then would be worth $96 to $103 or more today.
The White House on Wednesday said it would not release oil from the nation's strategic reserves to drive prices lower.
"This president would not use the (Strategic Petroleum Reserve) to manipulate (prices) unless there was a true emergency," said White House press secretary Dana Perino.
As of early November, the Strategic Petroleum Reserve contained 694 million barrels of oil. The government is working to fill it to its 727 million barrel capacity.
The solution to high prices lies in expanding domestic oil and gas production and increasing the nation's refining capacity, Energy Department spokeswoman Megan Barnett said.
Crude prices, which have flirted with $100 for months, have risen in recent days on supply concerns exacerbated by Turkish attacks on Kurdish rebels in northern Iraq and falling domestic inventories. However, post-holiday trading volumes were about 50 percent of normal Wednesday, meaning the price move was likely exaggerated by speculative buying.
"I would imagine the speculators are the biggest drivers today," said Phil Flynn, an analyst at Alaron Trading Corp., in Chicago.
It's hard to say whether prices would have risen as quickly on a normal trading day, Flynn said. While oil has soared on mounting supply concerns in recent months, speculators have often been cited as a reason for the swiftness of oil's climb.
Posted by Rui Fonseca at 12:55 PM