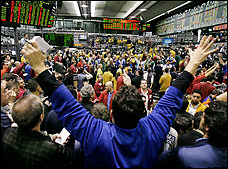 By Howard SchneiderWashington Post Staff Writer Thursday, January 24, 2008; 10:41 AM
The U.S. markets continued their dramatic recovery early this morning -- and so did European and Asian indexes -- as efforts to shore up the U.S. economy helped begin to calm a volatile climate for global stocks.
All three major U.S. indexes opened higher today, although the solid gains were partially shaken shortly after 10 a.m. when the National Association of Realtors reported that sales of existing single-family homes fell in December. By 10:30 a.m., the Dow Jones industrial average had gained 29 points and the Standard & Poor's 500-stock index was up more than 1 point. The Nasdaq composite index was up 17 points.
The gains followed a stunning reversal of the U.S. markets yesterday. They had traded down nearly all day, but by late afternoon began a quick rise. The Dow, which made a 5.4 percent swing, closed yesterday up 2.5 percent.
Wall Street's recovery followed both the Federal Reserve's most recent interest-rate reduction and news that regulators, investors and policymakers were working on efforts to ensure that bond insurance companies remain solvent.
Analysts said today's gains also could be partly attributed to solid earnings reports from Xerox and Lockheed Martin Corp., which were higher than originally estimated.
The new housing numbers, however, suggest that problems are continuing in that market. The realtors group reported that sales of single-family homes and condominums were down 2.2 percent in December and for the year, single-family home sales were off 13 percent, the largest decline in 25 years.
A complex of problems related to the U.S. housing market, in particular rising default rates on riskier home mortgages, has been a chief reason for recent turbulence in global credit and equity markets.
Major European exchanges were up more than 3 percent, despite a developing scandal involving billions of dollars in fraudulent trades at France's second largest bank.
Societe Generale Group announced that it had "uncovered a fraud, exceptional in its size and nature," involving a trader who had made "massive" investments beyond his authority and covered them up with a trail of fake transactions.
After investigating, the bank closed the trader's accounts, at a loss of about $7.1 billion. In announcing the losses this morning, the bank said it was also writing off another $3 billion related to mortgage and other investments in the United States, and would seek to raise an additional $8 billion in capital to strengthen its balance sheet.
Similar disclosures at U.S. banks and financial companies have added to the sense of crisis in the financial sector, but Societe Generale's announcement seemed to have little impact as investors took heart from recent moves in New York and Washington.
By late morning in Europe, the FTSE 100 was up nearly 4 percent, while Germany's DAX 30 had risen nearly 6 percent.
Several major Asian exchange also posted gains of more than percent.
Posted by Rui Fonseca at 1:09 AM