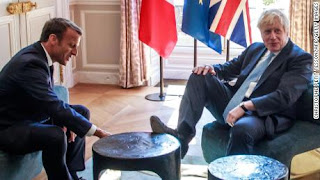 London (CNN)In the week that world leaders gathered in New York City for the UN General Assembly, one person's absence cast a long shadow over what was already set to be a tense few days.

French President Emmanuel Macron was never going to be at UNGA in person. It was, however, impossible to detach his non-attendance -- even in virtual form -- from the spat that broke out following the submarine deal between Australia, the UK and US (AUKUS), which subsequently saw the Australian government ditch a multi-billion-dollar agreement with France.
French officials have been, justifiably, furious. Three of its supposed allies struck a deal behind its back with one reneging on a contract agreed years ago. For a man who has spent his presidency presenting himself as Europe's most serious leader both internally and on the world stage, it was a major embarrassment .- aqui
Posted by Rui Fonseca at 8:18 AM