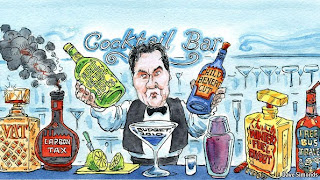 
FROM the outset Britain’s new coalition government has said that its main task is to tackle the yawning fiscal deficit, which hit a peacetime record of 11.1% of GDP in 2009-10. It will set out its plans in an “emergency” budget to be presented on June 22nd. The decisions made by George Osborne, the Conservative chancellor of the exchequer, working with Danny Alexander, the Liberal Democrat at the Treasury in charge of controlling spending, will be momentous, determining, perhaps, the government’s own longevity as well as Britain’s economic prospects.
In practice the budget will have to take into account the compact between the Tories and Lib Dems, as well as each party’s election pledges. But in principle this is an opportunity to start afresh, sweeping aside their own commitments and plans inherited from Labour, and learning from the experience of other countries that have had to impose big clampdowns. The question is how to close the fiscal gap while protecting a still delicate economy, securing public support through a distribution of pain that is seen to be fair.
The first step is to establish just how deep a hole has to be filled. On June 14th the new Office for Budget Responsibility (OBR), now in charge of fiscal forecasting, put the deficit in the financial year to March 2011 at £155 billion ($229 billion), or 10.5% of GDP, before any changes by the current government.
What matters most is the shortfall likely to persist after the economy has fully recovered, unless spending is cut and taxes are raised. On the new forecasts, the permanent weakening in the public finances from the financial crisis and recession is 5% of GDP, according to the Institute for Fiscal Studies (IFS), a think-tank. But that is based on a central projection from the OBR and Mr Osborne may want to build in a safety margin of up to 1% of GDP. Moreover, interest payments will rise by close to 1% of GDP between this year and 2014-15 because of the deluge of borrowing. Taking this into account, the cyclically-adjusted primary budget balance (which excludes interest payments) would need to improve by around 7% of GDP.
....
more
Posted by Rui Fonseca at 6:29 AM