McChrystal tinha-se permitido fazer considerações que denegriam os seus superiores civis.
Obama chamou-o e despediu-o. É assim que funciona  democracia.
President Obama dismissed Gen. Stanley A. McChrystal on Wednesday after concluding that his military chief in Afghanistan had badly damaged the chain of command and could no longer work effectively with the civilian leadership at a crucial moment in the war.
By selecting Gen. David H. Petraeus to take charge of the war in Afghanistan, President Obama has minimized the turmoil of a leadership change and built at least a temporary buffer against growing concern that his strategy is not demonstrating enough progress against the Taliban.
But in turning to the nation's most prominent general, Obama has embraced a commander who may become a formidable advocate for slowing, or arresting outright, the pace of troop reductions next summer.
In the short term, choosing Petraeus to replace Gen. Stanley A. McChrystal avoids many of the problems associated with removing the commander of a war effort involving 120,000 U.S. and NATO troops, billions of dollars in reconstruction projects and sensitive diplomatic negotiations.
------
U.S. identifies vast riches of minerals in Afghanistan 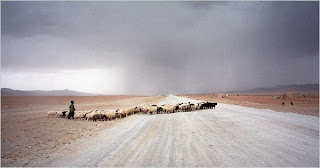 A bleak Ghazni Province seems to offer little, but a Pentagon study says it may have among the world’s largest deposits of lithium.
Posted by Rui Fonseca at 5:10 AM