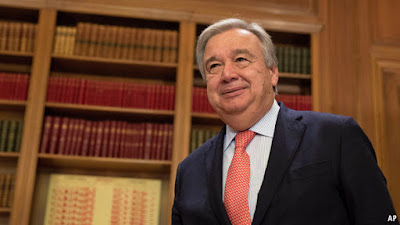 A safe pair of hands

AFTER he extended his lead against nine other candidates in a sixth straw poll among the 15 members of the UN Security Council, António Guterres, aged 67, a former prime minister of Portugal (1995-2002) and ex-head of the UN’s refugee agency (2005-15), looks set to be the next secretary-general of the UN. He received no negative votes in the poll, meaning that none of the five veto-wielding permanent members, critically including Russia, was minded to block him. A formal vote in the Security Council is expected to endorse the appointment tomorrow.
A relatively open process, which began with public hearings before the UN General Assembly in April, was initially expected to put an eastern European woman in the post for the first time. But none of the candidates with those credentials was deemed to cut the mustard. The very late entry of a second Bulgarian contender, Kristalina Georgieva, a vice-president of the European Commission, was said by some to offer serious competition to Mr Guterres. But her candidacy proved too contentious within the Security Council, as eight countries cast negative ballots, leaving the Portuguese claimant far in the lead. A previous Bulgarian contender, Irina Bokova, the head of UNESCO, the UN’s education and culture agency, was an early favourite, but her candidacy failed to take off.
The secretary-general has three broad tasks: to encourage a multiplicity of agencies to help poor countries grow less so; to uphold human rights across the world; and to prevent war and pick up the pieces after violence has broken out. His job was described by a previous incumbent as “the most impossible on earth”. Mr Guterres, a man of principle as well as pragmatism, will need luck as well as skill.Mr Guterres will take over from Ban Ki-moon, a South Korean, whose ten-year term has been widely considered a flop, though last year he oversaw a global climate-change agreement followed by the affirmation of an ambitious new set of development goals. Mr Ban also sought to promote women’s rights, streamlining a clutch of agencies to that purpose. His failure was generally ascribed to an inability to communicate effectively, especially when it came to bringing awkward customers to the negotiating table. Admittedly, when America and Russia are at loggerheads over such matters as Syria, it is exceedingly hard for a UN secretary-general to make peace.
Posted by Rui Fonseca at 3:17 PM