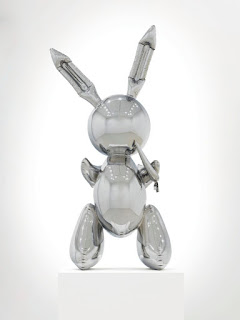 With postmodern art, your thought is the medium.

Two approaches divide the world of neuroesthetics. On the one hand, neuroscientists like Semir Zeki and Vilayanur Ramachandran and William Hirstein argue that artists, probably unconscously, obey certain "laws" of the brain's perceptual systems and so achieve beauty. On the other hand, neuroscientists like Jennifer McMahon and Bernard J. Baars point out (correctly, it seems to me) that beauty is a feeling, and whatever perceptions we may have, only a certain feeling equals beauty. Notice that these theories invoke two quite different brain systems: posterior perceptual systems and the limbic system.
But what about the postmodern? No longer do we have a beautiful object. We have Andres Serrano's Piss Christ or Chris Ofili's The Holy Virgin Mary complete with elephant dung. I think that these works involve a kind of response that depends neither on laws of perception nor on a feeling of beauty. Postmodern art, it seems to me, works in an altogether different way.
As a sample of that other way, I offer a response of my own to a less controversial work but a work that is surely an icon of postmodernism: Jeff Koons' "Rabbit" (1986).
This sculpture comes to about half human size, in cast stainless steel, an exceedingly difficult medium to work. Koons has had a casting made of a cheap, inflatable--here, inflated--bunny such as one would give to a child as a worthless, throwaway toy. It is, a catalog tells me, 41 x 19 x 12 inches. That is, it would (like its original) stand about waist high if it were on the floor, but it is usually shown on a pedestal so that one is face to face with the object.
It is a big bunny. It consists of four large blobs, head, thorax, and two legs. On the head two projecting liferaft shapes form ears. On the thorax there are two horn-shaped bumps for arms. Attached to the rabbit's left "paw" is a carrot-like object pointed toward the "mouth" from which dangles a limp "leaf" which must have been plastic in the original and is a thin, crumpled stainless steel foil in the sculpture.
The surfaces of the object are shiny, shinier than a glass mirror, if that is possible. Exact silvery reflections seem to leap from it. At the same time the seams and dimples of the inflated plastic show as seams and dimples in the steel.
It is, of course, outrageous to make all this of an inflatable bunny, and I laughed out loud a lot when I was looking at "Rabbit." It is a joke! This is kitsch glorified, and kitsch that received its ultimate accolade when, in the Macy's Thanksgiving Day Parade it joined the neon signs in Times Square.
"Rabbit" in the Macy's Parade
But is an inflated bunny any more trivial or ridiculous than the half-eaten apples and spilled wine of a Dutch still life? I think "Rabbit" asks me to think about the ugly, the trivial, about kitsch. What is kitsch? Isn't it an attitude on my part? An attitude that Koons has turned around, asking me if kitsch doesn't also deserve some vague reverence as an expression, no matter how base, of the human spirit, of pneuma. Koons asks me to think, just as the Dutch still life painters asked me to look at the deserted table and the half-eaten meal and think that "In the midst of life, we are in death."
As I looked at "Rabbit," what I became most aware of was the reflection of me, the surrounding gallery, other Koons works, other art works. We were all doubly reflected, from the snout and from the belly. It occurred to me that Koons might be playing with the idea that art is a "reflection" of its surrounding culture. In any case the work of art is not self-contained. Rather, it represents part of its culture (something you could buy it in Toys R Us) and we are part of it. Kitsch and art and culture and us together forever.


I also felt intensely that I was "facing" something: I was facing the rabbit and it was facing me. Eye to eye. I to I? No, the rabbit had neither eye nor I. The lines that would have been drawn on the original plastic to indicate eyes, nose, or whiskers were not there. There were no distinguishing features on the rabbit. This is a mass produced object. Or is it? "Rabbit" exists in three castings and an artist's proof. It is not itself a mass-produced object, although it represents one and in principle could itself be mass-produced. Is that important to its status as "art"?


Koons did not make this object. Some foundry did. All Koons did was have the idea and supervise the workers. Is that all an artist need do? Have an idea? Like conceptual sculpture? Isn't the idea more important than the necessarily fallible embodiment of the idea? Plato relevant here. What about Rodin? Who did his castings?
"Rabbit" has no face itself, but there is my face, staring out at me. Is Koons asking me to face myself? To face the objects of my culture? To ask what difference and individuality consist of? Has Koons created a work of art that will be physically different for every person looking at it? Can that be art? Is Koons, by creating this outrageous thing, "in my face"?
"Rabbit" is heavy. It must weigh a couple of hundred pounds. Think of the original. Ounces of plastic film and air. Is Koons talking about the "monumentality" of art? The way we use art to make the most trivial, empty (pun here) thing (all those half-witted Hapsburg princes, say) weighty, important, significant.

The original was full of air, and I remember that we speak of an artist's "inspiration," taking in air, pneuma, spirit, and rendering it back into tangible form out there. That is exactly what Koons has done, and I read the exactitude of the casting as reflecting (yes) the precision of the creative idea. Koons, as people have complained in this thread, is a creature of the media: "aired" in yet another sense, air turned into steel--or cash.


Like the Dutch still lifes, "Rabbit" got me to playing in my mind between the monumentality and the ephemerality of things. All the inflatable toys I ever had eventually, slowly deflated. The dimples got bigger and bigger until the thing got ugly and deformed. This one never will. A thing of beauty is a joy forever. A work of art like this is supposed to be permanent, timeless, plus it can endow with its own timelessness even such ephemerae as the dimples in a temporarily inflated piece of plastic junk.
It is also perfect. Koons has expressed a lot of interest in the "perfect" object, and "Rabbit" is surely that with its gleaming, shiny surfaces of an industrial perfection earlier ages could not even dream of. And it is also junk. And what is the difference, pray?
It is clean. The mark of a fingertip would show up as a profanation, a stain on this stainless steel. Again, I think of another artistic taboo: we are not to touch the objects in museums. I also remember that Koons is much interested in "clean" and "dirty," ranging from the antiseptic vacuum cleaner sculptures (also involving pneumatics) to the "dirty" pictures of him with La Cicciolina, his former porn star wife.

"Rabbit" is conspicuously without genitals, and genitals are another theme in Koons' work. There is an absolutely smooth surface where a real rabbit would have a penis. This too has a long tradition in art (no pun intended!), of representing women (but sometimes any creature) as having nothing whatsoever in the genital area. (I remember John Ruskin's shock on his wedding night. Would he have been happier with "Rabbit"?) Koons is said to be the only artist to have represented himself with an erection (in the sexual act, actually in the porn pictures with La C.) Yet shouldn't that be part of a self-portrait? Isn't sex, aren't genitals, important parts of us? What does it say about our culture that this child's toy has no penis, no vagina? Is that "clean"? Is it "stainless"?
"Rabbit" is a representation of an inflated rabbit which is a representation of a rabbit. Shades of Plato here. Sort of like my double reflection in the head and thorax. Which is at least as exact and perfect (although distorted) as either the inflated representation of a rabbit or the stainless steel one. And yet no one would say my reflection was "art"—or might someone?
What is distortion in art? Is the stainless steel bunny a perfect representation of the plastic bunny's imperfect representation of a bunny? Is not distortion intrinsic in every representation, including the mirror reflection of me which is me, moves with me, interacts with me? What is the relation between Picasso's distortions and, say, Sargent's?
And so on.
If you have followed me this far, you will have noticed that I am invoking neither of the two brain systems the neuroestheticians draw on. I am performing pure intellection, pure frontal lobe stuff with just the necessary perceptual information. There are no "laws of beauty" involved.

Koons, it seems to me, is very postmodern in that he works more with my relation to the object he creates than with the object itself. ("Rabbit" is a joke. It flaunts its very triviality.) Even more than stainless steel, my thought is his medium. He prompts me to think about the nature of art, of our looking at art, of humanity, of our times, of myself. Of course, all art does that, but it seems to me that the postmodern art of our times does it far more explicitly, demandingly, and shockingly. And postmodern art quite dispenses with the "beautiful object," the oil painting or the marble sculpture. It is true, I think, as has often been said, that postmodern art may be the thinning end of a long line of development from the modernism of the early twentieth century. Sure, but so was Watteau the end of a long line. So is every artist. And so are we. But we still deserve attention.
I think we owe every work of art as much thoughtful and empathic attention as we can afford to give it. It is wrong esthetically and even morally to give no more than a hasty dismissal to another human's work. Following one's gut reaction or this or that notion of "what is art" is wrong to the artist, but also wrong to ourselves. Hasty dismissal deprives us of aesthetic experiences.
We may end up disliking Koons' work, but at least we will have enjoyed the experience of getting to that conclusion. We will have enjoyed exercising our own frontal lobes, and that, not beauty, is the way the postmodern makes its special appeal to us.
Items I've referred to:
Baars, B. J. (1999, Jun-Jul). Art must move: Emotion and the biology of beauty. Journal of Consciousness Studies, 6(6-7), 59-61.
McMahon, J. A. (2000, Aug-Sep). Perceptual principles as the basis for genuine judgments of beauty. Journal of Consciousness Studies, 7(8-9), 29-35. 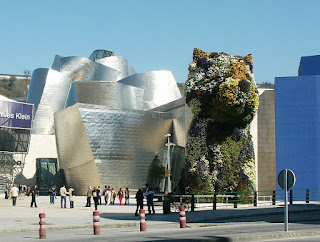 QUANTO VALE O PUPPY?
Posted by Rui Fonseca at 10:41 AM