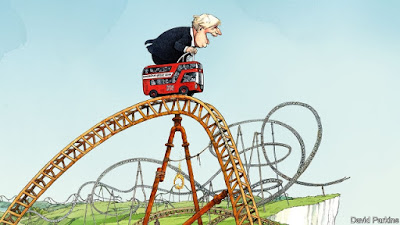 “Do you look daunted? Do you feel daunted?” asked Boris Johnson of the crowd of Conservative Party members who had just elected him party leader, and thus prime minister. The question was rhetorical, but many of them did look nervous—and so they should. Britain now has its third Tory prime minister since the vote to leave the European Union three years ago. Its deadlocked Parliament is refusing to back the exit deal struck with the eu, even as an October 31st deadline approaches. The pound is wilting at the prospect of crashing out with no deal. Steering a course out of this mess requires an extraordinarily deft political touch. Yet the Tories have gambled, choosing a populist leader who is nobody’s idea of a safe pair of hands.
Mr Johnson, who wrote a biography of Winston Churchill and longs for others to see him in that mould, resembles his hero in the sense that he has inherited Britain’s worst crisis since the second world war (see article). Brexit, and a no-deal exit in particular, promises to hurt the economy and leave the country diplomatically isolated in a world where its interests are under threat, as they are right now in the Strait of Hormuz. The risk is existential for the United Kingdom, as Brexit wrenches at the bonds with Scotland and Northern Ireland. 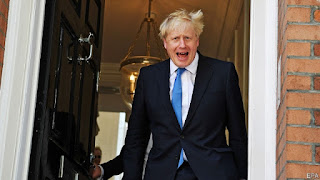 The new prime minister’s first statement to the House of Commons on July 25th summoned the ghost of his hero. The rhetoric was Churchillian; in the absence of Nazis, “sceptics and doubters”, “negativity” and the Labour Party would have to do as enemies. His mission, he thundered, was to deliver Brexit on October 31st with or without a deal; the country would make preparations for the latter with “the kind of national effort that the British people have made before and will make again.” Never mind that the spirit of the Blitz resonates with none but the oldest of his countrymen; once victory has been achieved, Britain will be “clean, green, prosperous, united, confident and ambitious”—indeed, he promised to make it “the greatest place on earth”.
But Boris Johnson’s ability to steer his country towards the “golden age” he promises is constrained. He will lead a fragile government, with a working majority that will fall to just one if the Conservatives lose a by-election in Wales next week, as seems likely. His promise to leave the euby October 31st, along with a further commitment to the “abolition” of the backstop, a default position designed to avert a hard border in Ireland by keeping Britain in a customs union with the eu, make it hard to see how he can get a new deal with the eu; and yet reconciling a majority of mps to leaving without a deal seems close to impossible.
Posted by Rui Fonseca at 6:26 AM