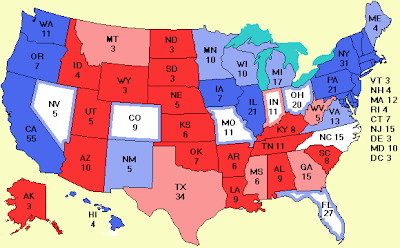 NEW YORK: Such is the surge in America's debt that even technology is finding it difficult to measure its level as a clock earmarked for keeping a tab on country'snational debt has run out of digits!

The operator of the National Debt Clock, installed at Times Square in New York, has now dropped the dollar sign in the total figure to accommodate a $10 trillion figure.

A replacement for the clock with two additional digits that would be able to account for up to a quadrillion dollars of debt is expected only by the next year.

The existing clock can accommodate up to $9,999,999,999,999 (just one dollar short of $10-trillion) of debt with a dollar sign ($) preceding it, but the clock has started showing the figure without the dollar sign after the debt level recently reached the 10-trillion dollar level.

The clock shows the total amount of debt owed by the US government and was first installed by real estate developer Seymour Durst.

The Durst Organization now plans to replace this clock with a newer 15-digit version, as against its current capability of showing 13 digits, in addition to a dollar sign.

The financial rescue packages totalling over a trillion dollar, including the latest $700-billion plan, and the government's expected move to buy shares in some banks, are expected to further inflate the country's debt levels.
http://economictimes.indiatimes.com/News/International_Business/US_national_debt_clock_runs_out_of_digits/articleshow/3577596.cms

The clock is said to have been first installed in 1989 when the national debt stood at about $2.7 trillion.

fund in November as managing director, sources said on Thursday.

Sipahimalani, who has held his current post at the U.S. bank since early 2007, was previously co-head of Asia-Pacific mergers and acquisitions based in Hong Kong, one source briefed on the move told Reuters. He has been with Morgan Stanley for 11 years, the source added.

The move came after Michael Dee, a former Morgan Stanley banker, joined Temasek as a senior managing director in August to oversee its new international division.

It was unclear if Sipahimalani will join the investment team or the international division.

Temasek has in the last year-and-a-half made high profile investments in Merrill Lynch and Barclays and is planning an expansion in Latin America as it looks beyond its Asian backyard.

The Chinese plot against capitalism
May 29th 2007
From Economist.com
An odd coupling of communism and private equity


CHINA'S secret plan to bring down capitalism, especially in America, has become a little less secret in the past week or so. One clue came with a brave piece of whistle-blowing; a second when China started deploying its huge arsenal of capital. Congress was right to worry, after all.
Those cunning commies in Beijing have studied capitalism and found its Achilles' heel: corporate governance
First, the whistle-blower. Lynn Turner was director of research at Glass Lewis, a firm that advises institutional shareholders how to cast their proxy votes. Last week Mr Turner said he was leaving, five months after Glass Lewis was sold to Xinhua Finance, a Chinese financial-information firm. According to the Wall Street Journal, Mr Turner, a former chief accountant of the Securities and Exchange Commission, was worried about potential conflicts of interest with other Xinhua businesses, and by “another potentially troubling aspect: Xinhua once had ties to China’s Communist Party”.
If you wonder why it took Mr Turner five months to figure this out, you are questioning an American hero.
One can only worry what the Chinese will do now to sway America’s institutional shareholders—who, let's face it, are a flock of sheep led easily astray.
What heroes the bosses of corporate America were to oppose changes in corporate-governance rules that could now empower the Chinese foe: prompt action by Congress could still block competitive elections for company directors, and shareholder votes on executive pay.
Even now, lists of useless directors to be imposed on corporate America are being drawn up in Beijing (though The Economist hears that the Chinese leadership is split over whether it can do more damage to capitalism by voting to pay corporate bosses less, or by sending their salary packages to ever more preposterous heights).
It is clear, too, that this proxy-voting strategy will operate in tandem with a direct assault of the commanding heights of capitalism, known to Beijing insiders as “investing in private equity”. Last week China said it would invest $3 billion in Blackstone Partners, one of the world’s leading private-equity firms. No matter that China is buying under 10% of Blackstone (which has a public offering under way) and has given up the voting rights that would ordinarily come with its shares. You can see where this is heading.
Private-equity firms are the new kings of capitalism. They buy up controlling stakes in big companies, and raise profitability by improving corporate governance. Until now, that is. What better way for China to set back capitalist industry than by buying into private equity, and thereby exerting its pernicious influence beyond the scrutiny of public stockmarkets?
This is only the beginning. A Chinese wall of money will be on its way, once the Blackstone precedent has been set. Hiding behind the bland language of “diversifying foreign-exchange reserves”, China plans to deploy abroad at least 40% of its $1.2 trillion reserves.
As the Financial Times has pointed out: “to invest that you would have to buy more than 10% of the capitalisation of the Dow Jones Industrial Average.”
Congress repulsed an earlier Chinese assault in 2005, when the China National Offshore Oil Corporation tried to buy Unocal, a Californian oil firm. Let it man the barricades again to stop the Blackstone deal. It should not be deterred by suggestions that selling a stake to China is a masterstroke by Blackstone’s boss, Steve Schwarzman (pictured left), to get the politicians in Washington to defend his firm as a jewel of American capitalism at the very moment that they were preparing to denounce private equity and to regulate and tax it more heavily.
Nor should Congress be lulled into inactivity by suggestions that the Blackstone IPO, which is expected to value the firm at over $33 billion, is evidence of a bubble in private equity—and that China's investment will prove about as canny as those disastrous purchases of American real estate and Hollywood movie studios in the early 1990s by that previous great Asian threat, the Japanese.
And don't let's be fooled by all the recent talk that China has embraced capitalism—to the point of allowing that American business icon, Starbucks, to set up shop in the Forbidden City. This is surely a Muhammad Ali-style rope-a-dope move to make the enemy complacent before the decisive blow is struck.
This column knows a plot when it sees one. This is China we are talking about—and capitalists, especially Americans, should be afraid, very afraid.


"The Economist hears that the Chinese leadership is split over whether it can do more damage to capitalism by voting to pay corporate bosses less, or by sending their salary packages to ever more preposterous heights)."
Soa familiar?
Bonus milionários, gestão ruinosa...